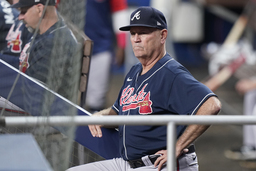 The Miami Marlins will send Braxton Garrett to the mound on Tuesday in hopes of preventing the visiting Atlanta Braves from clinching the National League East on their home turf.

Garrett will try to follow the example of teammate Jesus Luzardo, who threw six scoreless innings and fanned 12 in a 4-0 win over Atlanta on Monday in the opener of the season-ending series.

Atlanta's magic number to clinch its fifth straight division championship remains at one. The New York Mets had their game against Washington postponed by rain and will play a doubleheader on Tuesday. One Atlanta win or a New York loss will guarantee the Braves the No. 2 seed in the playoffs.

"You can't just go out and win a baseball game. It's hard," Atlanta manager Brian Snitker said. "There are a lot of moving parts. We're going to come back and give 'er hell (Tuesday)."

Garrett (3-6, 3.56 ERA) pitched four innings and allowed two runs on seven hits in his last outing against Milwaukee on Thursday. In three starts in September, he posted a 3.07 ERA with 12 strikeouts, five runs and two walks in 14 2/3 innings.

"Early in the season when my slider started to come around the new grip, I started getting more swing-and-misses," Garrett said. "My fastball command continued to get better as the season went on and that just built confidence in itself. ... I've learned the game and it's slowed down so much just since my first start here."

Garrett last faced the Braves on Aug. 14 and threw six scoreless innings. In two career starts against Atlanta, the left-hander is 0-1 with a 3.00 ERA.

"They have some good, young starting pitchers," Snitker said of the Marlins. "They've done a great job."

Odorizzi was lifted after pitching 3 2/3 innings and allowing two runs (one earned) on four hits and three walks in his last start against Washington on Wednesday. He hasn't won a game since beating the Pirates on Aug. 22.

The Marlins (68-92) continue to get plenty of production from Bryan De La Cruz.

If Atlanta wins one of the two remaining games, the Braves would become the only team in the majors to not suffer a sweep this season. The Braves are looking to become the sixth team since 1990 to go an entire season without being swept and the first team in a full season to do so since the 2004 Braves.

"I like where we're at," Atlanta third baseman Austin Riley said. "Obviously we wanted to clinch (Monday). But it is what it is. This team can do it. I'm not worried whatsoever."

A win would earn the franchise its 22nd division title, the most in major league history. The Los Angeles Dodgers and New York Yankees both have 20.