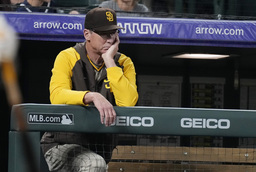 The San Diego Padres have a chance to win a series from the Los Angeles Dodgers for the first time since June 21-23, 2021.

However, after back-to-back 10-inning games, the host Padres were still undecided late Wednesday night about who was going to start the rubber match of a three-game set on Thursday night.

The Dodgers pondered the same question before deciding postgame on Wednesday that right-hander Brusdar Graterol (2-3, 2.89 ERA) would be the front man of a bullpen game. The Padres might wind up employing an opener, too.

While the Dodgers (107-48) have the luxury of having already clinched the No. 1 seed in the National League playoffs, the Padres (86-69) are still trying to nail down their postseason berth.

A 1-0 loss to the Dodgers on Wednesday coupled with the Milwaukee Brewers (83-72) posting a 5-1 win over the St. Louis Cardinals kept the Padres' magic number at four. San Diego remained 2 1/2 games ahead of Philadelphia (83-71) in the battle for the second of three NL wild-card spots, as the Phillies fell 4-2 to the Chicago Cubs.

Would the Padres like to end their run of eight straight series losses to the Dodgers? Certainly. But that is secondary to San Diego manager Bob Melvin at the moment.

"We just need wins to reach the next step," Melvin said.

The consecutive extra-inning games aren't the only factor complicating Melvin's Thursday pitching selection. Sean Manaea would be scheduled to face the Dodgers in the series finale, but the left-hander is 0-3 with a 14.49 ERA in four games (three starts) against the Dodgers this season. He has served up five home runs to Los Angeles in just 13 2/3 innings.

Those stats led Melvin to skip Manaea the last time the lefty was scheduled to start against the Dodgers.

The Padres might wind up utilizing Craig Stammen or Adrian Morejon at the start on Thursday, with other relievers picking up an inning or two.

"We have some things to consider," Melvin said Wednesday night when asked the identity of his Thursday starter. He then departed the postgame media session to start considering.

Dodgers manager Dave Roberts isn't facing the urgency Melvin is, but his bullpen also covered 7 2/3 innings the past two nights with a total of nine relievers. Evan Phillips and Tommy Kahnle worked both games. Graterol appeared in neither.

"We have options," Roberts said Wednesday afternoon when asked about his Thursday starter, "but we're also looking to see how the final six games and beyond set up."

This would be Graterol's fourth start in 111 career appearances. One of the previous starts also was against the Padres, when he gave up one run in 1 1/3 innings on Sept. 16, 2021.

In 10 career appearances against the Padres, Graterol has given up nine runs on 10 hits and nine walks with seven strikeouts in eight innings for a 10.13 ERA, a 2.375 WHIP and a .313 opponents' batting average. Graterol also has had several verbal dust-ups with Padres hitters, including Manny Machado.