Braves aim for sweep of Nats to keep pressure on Mets 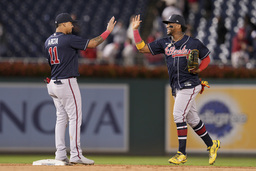 The Atlanta Braves will shoot for a three-game sweep of the host Washington Nationals on Wednesday, looking to maintain their momentum heading into a weekend series with the visiting New York Mets.

Winner of four straight, Atlanta (97-58) moved into a first-place tie with New York (97-58) atop the NL East when the Mets dropped a 6-4 decision to the Miami Marlins on Tuesday. The Braves watched the conclusion of the Mets' game from their clubhouse.

"The hope is to win (Wednesday) and then the hope is to have a good series against New York this weekend," Atlanta right fielder Ronald Acuna Jr. said through an interpreter. "The division is on the line."

Acuna did his part on Tuesday, hitting a pair of solo homers as the Braves rallied from an early 2-0 deficit to post an 8-2 win. Orlando Arcia homered for the second straight day and the Braves got a two-run triple from Michael Harris II and a two-run double from Eddie Rosario, who has hits in six straight games.

"It's almost like I can feel October right around the corner," Rosario said. "I'm definitely feeling good."

As they go for the sweep, the Braves will be looking for a bounce-back outing from right-hander Jake Odorizzi (5-6, 4.61 ERA). Last time out, he was pounded for eight runs on 10 hits in just four innings against the Philadelphia Phillies on Friday.

"I take accountability for it. It's time to make an adjustment within the next five days and be better."

Odorizzi, who has never faced the Nationals, has completed six innings just once in eight starts since joining Atlanta from the Houston Astros in an Aug. 2 trade.

The Nationals (53-101), who have lost seven of nine, got a solo home run from Victor Robles and two doubles from Luke Voit on Tuesday.

They will give Josiah Gray (7-10, 5.17) the start on Wednesday, possibly his last before shutting him down. In his first full season, the 24-year-old right-hander has worked 142 2/3 innings.

Obtained in the July 2021 trade that sent Max Scherzer and Trea Turner to the Los Angeles Dodgers, Gray is considered a piece of the rotation going forward. The Nationals have been monitoring his workload throughout the summer.

"He's learning. He's developing," Washington manager Dave Martinez said. "Like I've told him before: 'This has been a process. We're just going to keep going, see how you're doing.' But ultimately we're going to have to make a decision. We'll give him one more start and see where we're at."

Gray has struggled in September, going 0-2 with an 8.38 ERA in four starts. He allowed four runs on eight hits in six innings of a loss to the Marlins on Friday.

"I like the way he threw the ball (Friday)," Martinez said. "The big thing is he threw a lot more changeups. We want to continue to see him develop his changeup."

Gray is 1-1 with a 2.25 ERA in three career starts against the Braves. He has faced them once this year; he got a win on April 13 after throwing five scoreless innings of one-hit ball.