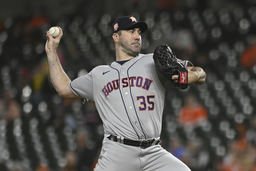 The Houston Astros would wrap up home-field advantage throughout the American League postseason if they can earn another victory over the visiting Arizona Diamondbacks on Wednesday.

Houston took the opener of the two-game interleague series 10-2 on Tuesday, but the triumph came with a bit of a scare.

Astros designated hitter Yordan Alvarez turned his left ankle in the first inning, catching his spike in the dirt on a single to left field.

Alvarez limped out of the box and met with manager Dusty Baker and training personnel at first base before remaining in the game. He took a called third strike in the third inning before departing the game for precautionary reasons.

Following a lengthy bout with hand soreness that sapped his power, Alvarez appeared to have reclaimed his power stroke in recent weeks.

He is hitting .407 (22-for-54) with six homers and 14 RBIs during his past 16 games. Alvarez had totaled just one home run over the prior 29 games while his slugging percentage dropped more than 100 points.

With 37 homers on the season, Alvarez represents the Astros' most intimidating power source. Houston (102-53) can ill-afford to be without him.

"We just thought it was better to take him out and look after him," Baker said after the Tuesday win. "Hopefully he'll be OK in a couple of days.

"Yeah, it does make me nervous. It makes us all nervous. You saw the spike get caught but you didn't know what it was. You didn't know if it was his knee, his ankle. You saw him limp some. Yeah, we're very nervous this close to the postseason."

Despite allowing just two runs on six hits over six innings against the Baltimore Orioles on Thursday, Verlander took the loss and saw his streak of consecutive winning decisions end at nine. He had gone 9-0 with a 1.21 ERA and a .445 opponents' OPS over his previous 12 starts.

Verlander is 4-1 with a 2.14 ERA over five career starts against the Diamondbacks. In his most recent appearance against Arizona, on Sept. 16, 2018, Verlander allowed one run on three hits and one walk with 11 strikeouts over seven innings in a 5-4 victory at in Houston.

Right-hander Zac Gallen (12-3, 2.46 ERA) has the starting assignment for the Diamondbacks (71-84) on Wednesday. Arizona has lost two in a row and four of its past five.

Gallen is 1-0 with a 3.50 ERA in three career starts against the Astros.

While Gallen is the rock of the rotation, the Diamondbacks want to get a close look at other young pitching options such as Tommy Henry and Drey Jameson. That plan prompted the team to shut down veteran left-hander Madison Bumgarner for the rest of the season.

"I like to pitch, I like to compete, but I understand it," Bumgarner said, according to MLB.com. "It was a conversation that we had about what would be best."