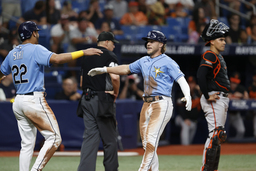 At this time last year, the Tampa Bay Rays were headed for their third straight postseason and the Baltimore Orioles were in the middle of a 19-game losing streak.

Now, the Orioles are pushing to end their five-year playoff drought, and there also is a chance that Baltimore could keep Tampa Bay from playoff baseball.

That is the backdrop for the rubber game of a three-game series between the teams on Sunday in St. Petersburg, Fla., the clubs' final regular-season meeting of the year.

The Rays and Orioles have flipflopped holding the final American League wild-card position the past two nights, when Baltimore won 10-3 on Friday and Tampa Bay posted an 8-2 victory on Saturday.

Despite the Saturday result, it looks as if the Orioles have momentum on their side. They are 24-12 since the start of July and 8-3 in August.

The Baltimore offense pounded out 19 hits on Friday, including five from shortstop Jorge Mateo. Second baseman Rougned Odor went 4-for-5 in the series opener, then added two hits on Saturday.

The Orioles' revival is largely due to its farm system. Baltimore has given major league debuts to 12 players this year, a list led by 24-year-old catcher Adley Rutschman.

The Rays hope the Saturday result gets them back on track after they lost three straight and four of the previous five games. In the victory, Tampa Bay scored more runs than it had in any game since the All-Star break.

Outfielder Jose Siri, who hadn't hit well since being acquired at the trade deadline, paced an 11-hit attack with three hits, while Randy Arozarena and Francisco Mejia each added two hits and an RBI.

"That happened (Saturday)," Tampa Bay manager Kevin Cash said with a laugh when asked whether it qualified as a "breakout game" for his team. "I'll let you know (Sunday)."

Arozarena raised his batting average to .259 by going 2-for-3 with a double and two walks.

However, the best news of all for the Rays came before the game. Harold Ramirez, who fractured his right thumb on July 17, took batting practice and worked out on the field prior to the game. Manuel Margot and Wander Franco, two other key cogs in Tampa Bay's offense who are on the injured list, aren't far behind Ramirez.

"With a lot of new additions, we're trying to blend that new personality," Tampa Bay hitting coach Chad Mottola said. "The injuries we've had are real. It's nothing we can spend a lot of energy worrying about; we're just having to work with a new identity."

Jordan Lyles (9-8, 4.35 ERA) will start for Baltimore on Sunday, looking to build on a three-start winning streak. The right-hander limited the Toronto Blue Jays to two runs in 5 2/3 innings on Monday.

Tampa Bay will counter with right-hander Drew Rasmussen (6-4, 2.96 ERA). In his latest outing, Aug. 7 against the Detroit Tigers, Rasmussen was lifted after three scoreless innings as the Rays attempt to limit his workload.

Rasmussen has no decisions and a 4.15 ERA in two starts against the Orioles this year, leaving his career mark vs. Baltimore at 1-0 with a 2.65 ERA through five games (three starts).