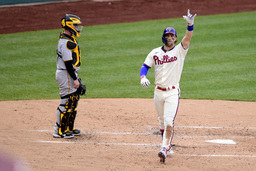 The Philadelphia Phillies have taken full advantage of a favorable schedule late in the season.

And it might just be enough to propel them to the playoffs for the first time since 2011.

The Phillies (81-74) took two of three from the Baltimore Orioles and now they have a chance to sweep a four-game series against the visiting Pittsburgh Pirates on Sunday afternoon.

Following their 3-0 win over the Pirates on Saturday, the Phillies sat 1 1/2 games behind the Atlanta Braves for first place in the National League East.

Bryce Harper and Matt Vierling each homered to provide more than enough offense. Harper's solo blast was his 34th of the season.

"Bryce is one of the hottest hitters on the planet," J.T. Realmuto said.

Ronald Torreyes had another hit on Saturday and stayed hot against the Pirates. Torreyes hit an RBI single and a three-run homer the past two games.

"You look at his career numbers with runners in scoring position, I mean, there's not going to be a lot of home runs, you understand that," Phillies manager Joe Girardi said. "But he's hit his whole career. It just tells you why I love him so much. He's always prepared. He's ready to hit, go to third, short, second, wherever I put him."

The Phillies are scheduled to throw another bullpen game on Sunday. It's unclear who will be starting, but the entire bullpen will be ready. Adonis Medina is a strong possibility, but Girardi wouldn't confirm the move.

"I'm working every day because I want the playoffs," reliever Hector Neris said. "I've waited for that my whole career."

The Pirates (57-97) are careening toward a 100-loss season, but they continue to compete.

Saturday was the first time in the three games that they didn't build a lead.

All they can do now is to keep playing hard and do everything possible to come up with a victory.

"They need to play in games like this," Pirates manager Derek Shelton said. "They need to feel the atmosphere like it was here. It's not like we're playing bad baseball. We're getting beat by a pitch or two."

The Pirates managed only four hits on Saturday, but they played hard until the final out.

"The most vital thing to take away from this series -- and even going a little further into this season -- is the mindset of competing," said Wilmer Difo, who homered and drove in two runs on Friday.

"It's important for these young guys to understand that no matter the results, you've got to go out there with the mindset and the heart willing to compete."

The Pirates will send Max Kranick (1-3, 7.28 ERA) to the mound to try and salvage a win. Kranick had been pitching well at Triple-A, but hasn't found the same consistency with the Pirates.

Kranick has yet to face the Phillies in his career.